Last Sunday (January 5), Rose attended the 77th Annual Golden Globe Awards alongside Kit Harington who was nominated in the Lead Actor – Drama category. She looked gorgeous wearing an Elie Saab dress. The gallery has been updated with photos from the red carpet and HBO’s After Party and you can find below a compilation of Rose & Kit on the red carpet ! 🙂

On December 10th, Rose and husband Kit Harington attended MS Society’s « Carols by Candlelight » Event in London to support the charity and help raise awareness of MS Research. As part of the event taking place in St. Botolph-without-Bishopsgate Church, they both did a reading.

Below you can find pictures taken inside and outside the church. A couple of videos have also been posted on Twitter, you can check them by clicking here and here 🙂

While « Death on the Nile » is still filming, Rose has made a rare public appearance on December 3rd as she attended the Tory Burch holiday party hosted by Elizabeth Saltzman at the Ladder Shed at the Chiltern Firehouse in London. She posed alongside her younger sister Portia and communications director Hayley Bloomingdale ; the few pictures which have been released can now be found in the gallery ! 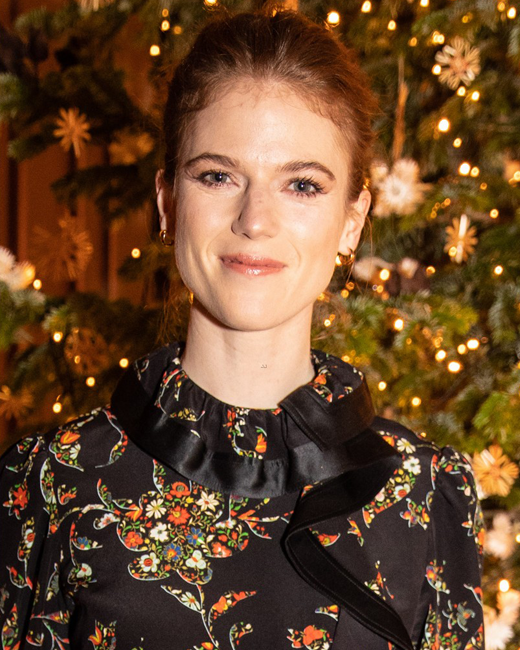 A guest also shared videos from inside the party on Instagram on which Rose can be seen enjoying live music with her sister.

200 high-quality screen captures of Rose in the last episode of Season 3 have been added to the gallery ! Considering how it ends for her character, it is doubtful that she will be back for Season 4 but nothing has been confirmed yet, wait and see !

As previously announced, Rose attended the SMS Battles Quiz for The MS Society two days ago. Kit couldn’t make it but she was joined by Emilia Clarke and Downton Abbey co-stars Sophie McShera, Rob James-Collier & Phyllis Logan ! She also posed with Poldark actor Luke Norris and looked lovely in a long organza-style shirt dress from Maje. The dinner auctioned by Kit & Rose has been won by football player Aaron Ramsey for £8000 and at least £355,000 have been raised during the night to help MS research !

After being away for the last three episodes, Rose’s character is finally back and she means business..! 303 high-quality screen captures have been added to the gallery.

210 high-quality screen captures of Rose as Maia Rindell in The Good Fight Season 3 Episode 4 have been added to the gallery, enjoy !

Back on April 3rd, Rose attended the premiere for the last and final season of Game Of Thrones, which took place at the New York City’s Radio City Music Hall in New York ! She wore a gorgeous Oscar de la Renta Spring 2019 dress and looked absolutely stunning. As the past week has been eventful and the premiere has brought us a lot of content, it took me some days to be able to gather everything but it is now done, I hope you will enjoy ! 🙂 Below you can find : many HQ pictures of Rose (and Kit) on the red carpet and at the after party where Rose reunited with close friend Emilia Clarke ; a portrait of Rose and Kit as well as a video from the photoshoot and screen captures of the video ; and finally a video compilation of Rose at the event including her arrival, posing on the red carpet and chatting at the after party.

Saturday Night Live’s latest episode was hosted by none other than Kit Harington and Rose made a surprise appearance alongside other Game of Thrones co-stars and friends, Emilia Clarke & John Bradley ! She made a short cameo during Kit’s opening monologue and was on stage during the end credits, you can find both videos below. HQ stills, lovely behind the scenes pictures & HD screen captures of the episode can also be found in the gallery :

292 high-quality screen captures of Rose as Maia Rindell in The Good Fight Season 3 Episode 4 have been added to the gallery, enjoy !

She’s back !! Rose attended the @mithridate.offi

Rose as Ygritte - no one could have done it better