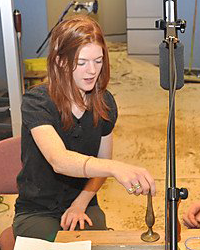 Four hundred years after its first performance, Shakespeare’s play still captivates audiences with its story of usurping brothers, monsters, magic and romance. Significantly it is also a world in which sound plays a crucial part, with Prospero’s island being ‘full of noises’. Prospero, the exiled Duke of Milan plots to restore his daughter Miranda to her rightful place, using illusion and skilful manipulation. A tempest brings Prospero’s brother Antonio and Alonso, King of Naples to the island. Once there, Ariel and Prospero’s machinations bring about the revelation of Antonio’s evil cunning, the redemption of Alonso, and the marriage of Miranda to Alonso’s son, Ferdinand.