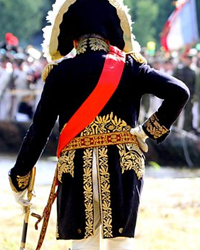 In the world of Napoleonic-era battle re-enactments, the King’s Brigade are what are known as ‘hard-liners’. Every stitch is crossed just so and every button a perfect match for the original. Martin is Major General of the King’s Brigade and his daughter Amy has become increasingly worried that his hobby is harming her parents’ marriage. So on the most important weekend of his calendar – the Battle of Waterloo – Amy adopts the disguise of a male soldier, crosses enemy lines and stages an almighty intervention.