Our Rose is the cover star of Harper’s Bazaar UK’s June 2022 issue in which she discusses ‘The Time Traveler’s Wife’ ahead of its launch next month. The photos taken by Alexi Lubomirski are absolutely gorgeous ! You can find them all in the gallery and don’t miss Rose’s interview below. The issue will be on newsstands on May 4; scans will be added to the gallery as soon as available.

Rose Leslie is doing that British thing of apologising when it’s not her fault.
We’d arrived at different cafés with the same name, and when we eventually find each other, she bursts into a flurry of ‘sorries’. It goes to confirm what I’ve always suspected: she’s preternaturally nice.
Sitting in a busy north-London café, casual in a viridian jumper over a Breton top with a denim skirt and white trainers, she also looks surprisingly normal. It’s only when I spot heads turning that I remember just how famous she is.

Unforgettable in Game of Thrones as the fierce, warrior wild-woman Ygritte (who captured her now-husband Kit Harington’s heart on screen and off), she has subsequently held her own in Hollywood blockbusters against the likes of Vin Diesel and starred in three seasons of the prime-time, Emmy Award-winning drama The Good Fight, as well as in Kenneth Branagh’s sumptuous adaptation of Death on the Nile this year.

Until recently, hers was a high-octane existence: though based in New York, she was constantly shuttling across the Atlantic. « North London is a different world, » she says of her trendy neighbourhood, today framed with clouds of cherry blossom and violet magnolia. « You feel you can breathe in this space – although I have never stepped into so many churches in my entire life!«

She gave birth last February in University College Hospital to her first baby, a little boy (the couple are keeping the name private), and, except for an intense six months back in New York filming her new project, has settled into domestic life, motherhood and her local community. She now spends most mornings attending play groups in church halls. « It’s a glorious thing, » she says brightly, sipping her coffee, « to be in that shared space with new mums, willing to open up about the trials and tribulations, and be like, ‘Yes, I’m actually finding it quite tough.’ When my son was born, the narrative seemed to be that you’re automatically going to be enamoured with this little person. But why should that be the case when you have never experienced having a child? Why should it come innately?

« There’s an element of me saying, ‘Hey, buddy, we’re here now. It’s amazing. But I’ve got to get to know you, and forge the relationship that’s going to see us through our lifetime.‘ She tucks her tousled golden-red hair behind her ear. « It’s something my husband also found. Once we recognised that the love gets built rather than being 100 per cent there from the start, once we voiced that opinion to each other, it felt like a real release. » 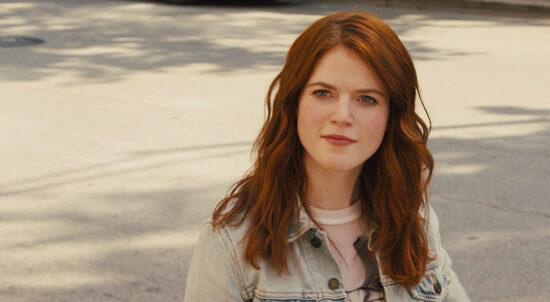