NEW YORK POST – As the lady’s maid Gwen on “Downton Abbey,” Rose Leslie captured the spirit of an independent-minded woman, circa 1912, who saved up enough money to buy a typewriter and taught herself to type. So long, place settings and candlesticks. Hello modern world.

In 2017, Leslie fully entered the modern world in terms of her TV roles. Following her smashing success as the doomed Ygritte on HBO’s “Game of Thrones,” the Scottish actress was cast as rookie lawyer Maia Rindell on the CBS All Access series “The Good Fight,” a 10-episode, post-Julianna Margulies extension of the long-running series “The Good Wife” — already renewed for a second season.

To film the series, Leslie moved from London to Williamsburg, Brooklyn, and just like “Downton” and “Thrones,” immersed herself in a foreign world, this one marked by legalese and power suits. She didn’t have to take a crash course in the American court system. “So far, I haven’t really come across a word I haven’t been able to pronounce,” says Leslie, 30.

Maia gets a job working at a primarily African-American law firm under the tutelage of her parents’ friend, Diane Lockhart (Christine Baranski). On camera, it’s a complicated relationship. Shortly after taking Maia under her wing, Diane learns she has lost her life savings in a Ponzi scheme apparently engineered by Maia’s father (Paul Guilfoyle). Off camera, Leslie has joined the Baranski fan club. “She is the most gracious woman I’ve come across,” she says, suddenly aware of what a kiss-up she sounds like. “That’s not just me, brown-nosing.”

While Baranski receives star billing, of course, Leslie has benefitted from one of the show’s best subplots: the young idealist realizing her family may be completely corrupt.

“Through the arc of the 10 episodes, it’s interesting to see the eroding relationship with Maia’s father,” she says. “The momentum is really gathering speed around the Ponzi scheme and it’s crashing down around her.”

The series has tackled some contemporary issues such as fake news, and plays more like a cable series with features you’d never hear or see on an ordinary CBS series (including nudity and four-letter words). Maia rarely curses, but Leslie did film some nude scenes with Helene Yorke, who plays Amy, Maia’s lawyer girlfriend. “It’s a fantastic way to see the relationship between Maia and Amy,” Leslie says. “You can observe them as two loving people. It expresses how strong they are as a unit.”

With production completed, Leslie has returned to England, and to her boyfriend of four years, Kit Harington, whom she famously met on the set of “Game of Thrones” (he played Jon Snow). She seems to know she has landed the most popular (and coveted) hunk in the medium, but all she’ll say about him is “My boyfriend is a phenomenal man.”

Their romance on “GoT” offered a welcome break from the series’ trademark carnage. Fans fell in love with the pair, putting together YouTube montages of their story, like any popular soap opera couple. Ygritte’s death scene, with her memorable last line, “You know nothing, Jon Snow,” was truly moving. Which raises the question: If every woman wants to die in Jon Snow’s arms, what was it actually like to do so?

“This is me going back,” Leslie says. “It was very emotional. The love that she felt for Snow overrode any frustration she felt. It was very painful. Ygritte was happy to be dying in the arms of the man she loved. It was a very lovely storyline to be a part of.” (source) 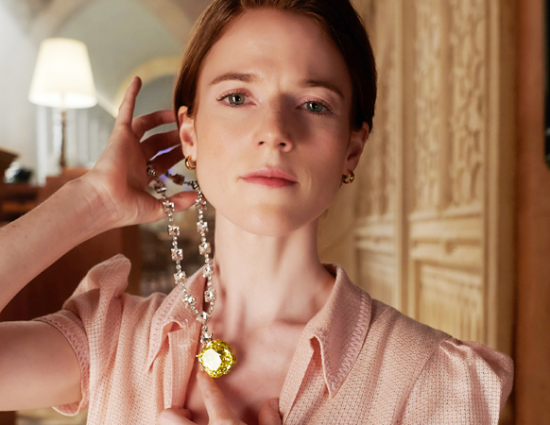