TORONTO SUN —  Rose Leslie was a mere wildling when she first became a fan of the American network drama The Good Wife – which recently spun off a sequel The Good Fight. The Scottish actress had begun working on her three seasons on Game of Thrones, playing Ygritte, the fire-haired wildling with a “thing” for Jon Snow. “Channel 4 in the U.K. carried The Good Wife. And I kind of picked it up with my friends in Season 4, and we watched it to the end,” says the actress, who co-stars with Christine Baranski in The Good Fight. “It was a complete escape for me,” she said in a phone interview on a break from filming in New York. “I was a fan, but I was completely oblivious that there was going to be a spinoff. So I was very ecstatic when I heard.”

One of those apparently magical U.K. actors, capable of adopting a convincing American accent at will, Leslie was cast as Maia Rindell, the daughter of a disgraced Bernie Madoff-type billionaire scam artist, whose budding law career is derailed by his downfall. Among his victims: Maia’s godmother Diane Lockhart (Baranski), the Chicago law firm partner from The Good Wife, whose retirement plans are similarly scuttled by her losses (and whose reputation is in tatters because she’d convinced so many friends to invest with Rindell).

So the world we knew from The Good Wife is upside down. The first episode opens with Diane turning off the inauguration of President Trump and pouring herself a giant glass of wine. And in a news report, we hear Maia’s father described as a, “financier for the liberal elite.” For starters, that was some pretty impressive reaction to actual events. Leslie read the original pilot script, “and it started with Diane Lockhart kind of looking around at a French villa she was living in. After the president’s win they did some quick surgery. I got a few chuckles when I saw it.”

As for the “liberal elite” line, “I guess that’s what he was,” she says of her TV dad (played by Paul Guilfoyle). I think (the producers) want to make sure their show is very relevant to the political climate. And we are dealing with a liberal bubble when we are talking about (Adrian) Boseman (Delroy Lindo), and the African-American law-firm that my character and Diane go to.” (At the end of the pilot, Maia and Diane are jokingly referred to as “diversity hires”). “They’re kind of signalling that there isn’t going to be just one line of political opinion in the series.”

There are other ways in which The Good Fight exists in a different world than The Good Wife. Maia is in a same-sex relationship with an assistant state attorney named Amy Breslin (Helene York). Candid scenes of them at home during the turmoil, include a scene of Amy consoling Maia in the shower. “I love that it’s so candid,” Leslie says. “I love the shower scene between two women; you can see how loving they are to each other, how comfortable they are in their own skin and their own sexuality. And I like the fact that the show doesn’t make a thing out of it. It is just a simple fact that these two women are in a relationship, they support one another.”

Despite being raised in a castle (her family’s 15th century ancestral seat in Aberdeenshire), Leslie needed some research in being truly “to the manor born.” She found it in the book The End of Normal: My Life as a Madoff, by Madoff’s widow Stephanie Madoff Mack. “That book was indeed a very small insight into understanding the harsh reality of a terrifying fall such as the one she and her family went through,” Leslie says. “The reality of my life is that was I was brought up in a very drafty house with holes in the roof,” she adds cheerfully. “So there’s nothing really very fairytale-esque about my upbringing. But I feel very fortunate.” (source)

“I do miss the pub, and the weather being sh*t”: Rose Leslie takes on America 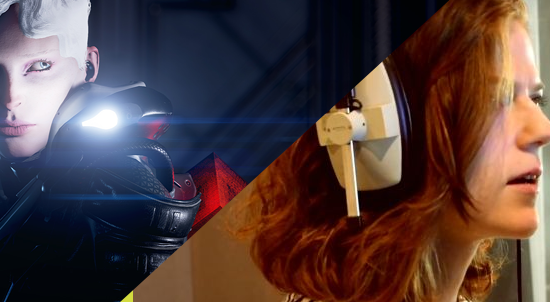