PEOPLE – One of Game of Thrones‘ greatest love stories was that of Jon Snow and Ygritte — and now, Rose Leslie fans have a new on-screen romance to look forward to. The actress is set to star in the upcoming Good Wife spinoff, The Good Fight, as Maia Rindell, Diane Lockhart (Christine Baranski)’s goddaughter, who joins the Lockhart/Lee firm just before a massive scandal upends both of their lives.

PEOPLE caught up with the cast at the show’s premiere party in New York City on Wednesday evening, and actress Heléne Yorke dished on what it was like playing the character of Amy, Maia’s longtime girlfriend.

“She brings such a grounded energy,” she continued. “Our characters have been in this relationship for a long time and you sort of get that sense because she and I have a very easy, natural way with one another.” So, how does she feel about any comparisons to Kit Harington‘s Jon Snow? “I like to think that I’m winning as a fictional partner!” said Yorke with a laugh. But jokes aside, Yorke couldn’t be happier about the role. “What’s really nice is that it doesn’t feel like: ‘Oh, the character is a gay female,’ ” she said. “It just feels like she’s in this relationship. So there’s not a real meal made out of it, which is what I think does it so much credit and does the show so much credit.”

And Leslie, 30, agrees. “Her sexuality has nothing to do with whom she is in the show,” Leslie told PEOPLE. “It is a fact, and she’s just in a very loving relationship.” So is the star looking forward to taking on a brand-new role, leaving beloved Ygritte aside? “I’m phenomenally excited to be able to have the opportunity to explore different characters with different television shows,” she said. “I think that I’m a very lucky actor to be able to do that.” (source)

VOGUE – The new legal drama The Good Fight may have spun off of CBS blockbuster The Good Wife, but star Rose Leslie, a newcomer to the franchise who plays a young lawyer mired by a Madoff-like Ponzi scandal, has an impressive TV backstory of her own: In addition to playing key roles on two rabidly watched dramas, Game of Thrones and Downton Abbey, Leslie is also Jon Snow’s real-life better half.

“Not going to lie—FaceTime is brilliant,” she said of her relationship with GoT comeback kid Kit Harington. “I think it will always be tricky if you happen to fall in love with somebody who’s in the same profession, whether you’re actors, doctors, or lawyers,” Leslie added, wearing a frock by Lafayette 148. “Heléne Yorke [Masters of Sex] plays my girlfriend on the show. We hit it off, so it was easy to slot into her body language. Their relationship starts out so solid, but it becomes, like any relationship, a bit tumultuous as the season progresses.” (source) 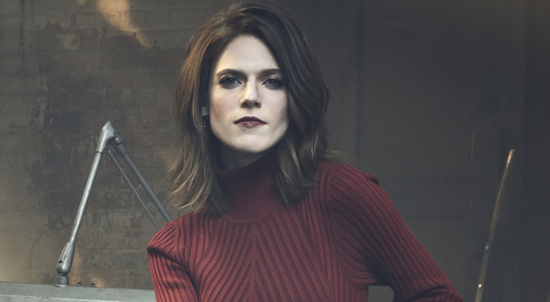